Kusama’s World: Mirror, Mirror …To Infinity and Beyond 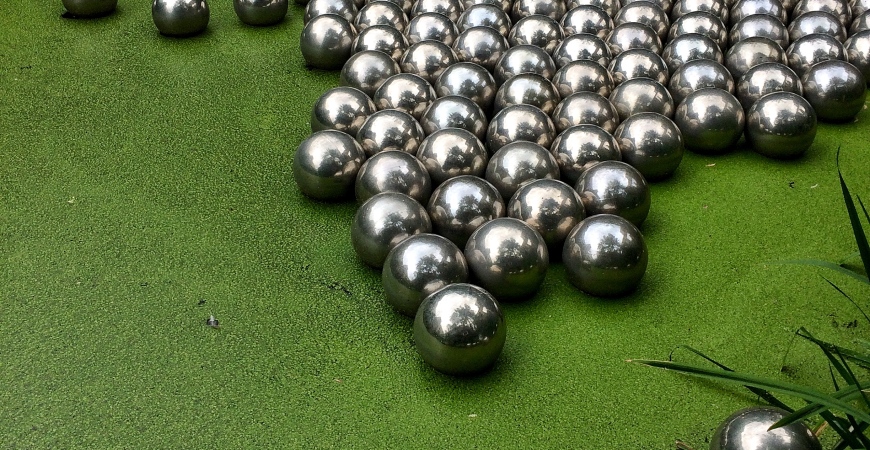 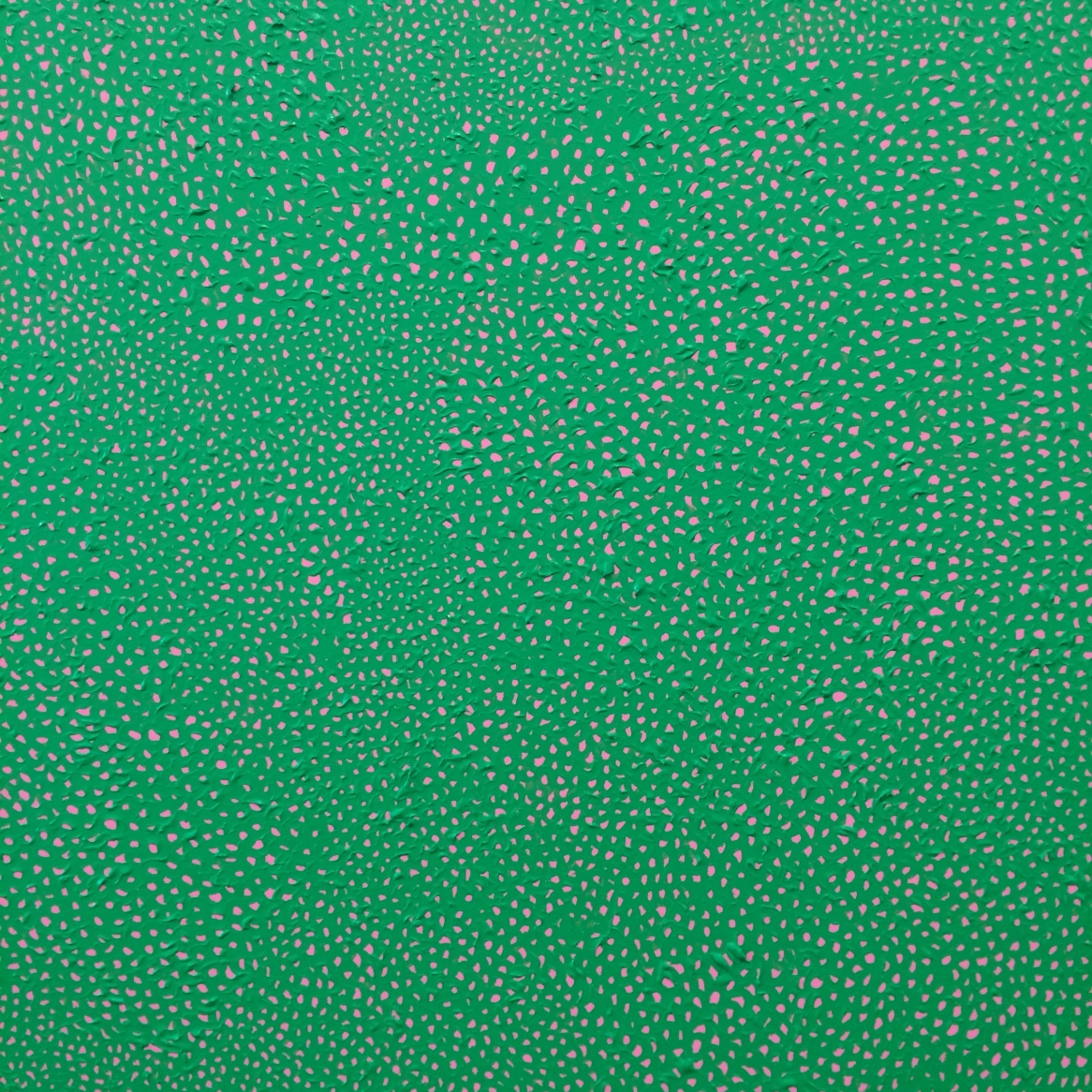 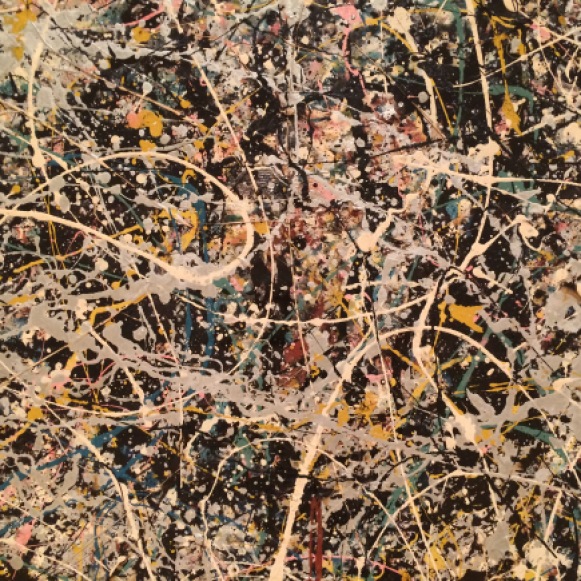 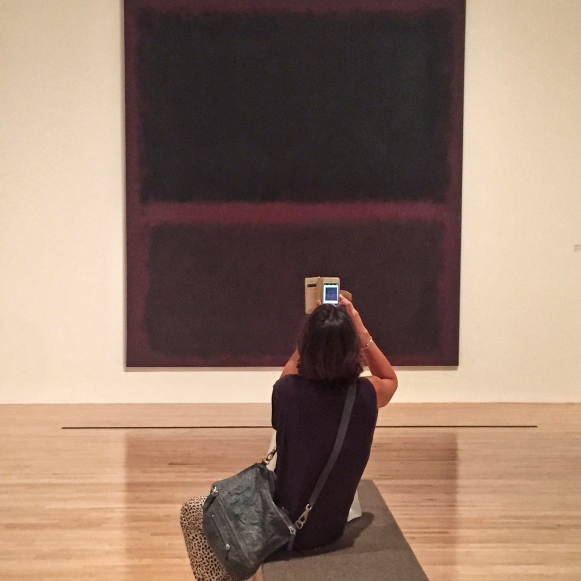 But as seen in a recent post, Kusama’ s nets were born out of her hallucinatory visions, her Abstract Expressionism being an artistic fighting mechanism against psychological self-obliteration.

A self-declared “obsessional artist”, Kusama lives her art inside her own head and seems to breathe it onto canvas and soft sculptures. It was only a matter of time before using small finite rooms became another visual expression and representation of her troubled psyche. It started around 1965.

Kusama’ s Infinity Rooms are small yet they open up an infinite sense of space as mirrors reflect lights, objects and viewers in all directions.

Stepping into a Mirror Room

Stepping in gives you a vertiginous illusion of infinity as well as a beautiful experience of self-obliteration.

Indeed, you know you’re in a small space and that there is only one of you. Yet the mirrors de-multiply your reflections in a fractal visual feast until it cancels you out totally, depending on where you stand and how you play with your angle of view. 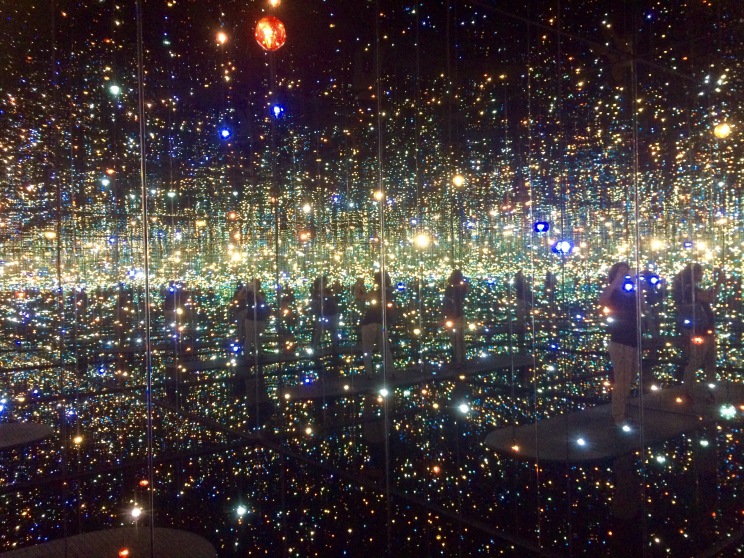 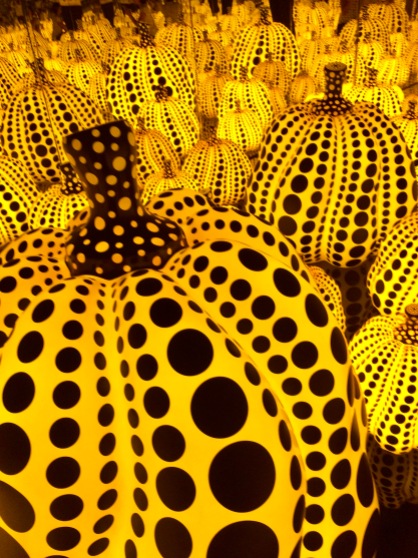 All the Eternal Love I have for the Pumpkins, 2016, Victoria Miro Gallery, London
If you think about it, it’s a very powerful image of how assailed and annihilated Yayoi Kusama must feel when she experiences her psychotic attacks.

Yayoi Kusama, All the Eternal Love I Have for the Pumpkins, 2016, Victoria Miro Gallery, London

She describes their effect on herself in her own words as “dissolving and accumulating, proliferating and separating¹”. Yet one constant remains: the illusion of endless recession of space she creates in these very popular infinity rooms.

At the same time enticing, terrifying and probably where I find Kusama at her most expressive.

Going back to the origin of mirrors

Now, let’s pause for a moment and think about mirrors as a choice of material.

Going back to the Neolithic Age, the first mirror were made of obsidian, a type of natural glass which forms from rapidly cooled volcanic lava stone.

Able to take a high polish, obsidian was used as weapons. With the help of a little water and a slightly convex hemispheric form, it could also reflect back one’s image.

Obsidian as a natural glass is amorphous – made of randomly organized atoms.

Through time and natural exposure to moisture, obsidian can undergo a process called de-vitrification. It basically stops being glass – its structure gets gradually more organized with areas undergoing structural organization or crystallization.

Pale grey fibrous mineral crystals appear and obsidian becomes snowflake obsidian. A nice metaphor to what actually happens to any human being looking at the reflection in the mirror…You age but you have more structure inside you!

Why am I bringing this up? Because this way of looking at what mirrors are and do is very much a Western view. And this bring risks of a myopic take on Kusama’s work.

Mirror as Symbol of Narcissism?

Indeed, with polka dots plastered from Obliteration Room to countless merchandising, endless reflections, self-obsession…Could mirrors be the fabric of her self-promotion and egomania?

Take her Narcissus Garden installation…It’s gorgeous and kinetic, reflecting changes in the sky, moving with the wind… but the first time around, it was installed at the 1966 Biennale and Yayoi Kusama tried to sell some of the individual mirror balls for $2 a piece, creating an outrage as well as wild publicity.

Was she making a direct critique of grandiose art shows compared to what artists actually pocket from the sale of their works? Was it a not-so-subtle reminder that, as an artist, she needed to sell to survive?

Was it just for publicity?

Or was it part dematerialization of herself when it comes to her art? Seeing no distinction between the mirrored balls making up the art, her reflections in them and herself as an artist, selling her work piecemeal was just another take on her self-obliteration.

Western eyes see mirrors populated with a proliferation of one’s reflections –  as seen in The Passing Winter (2005). 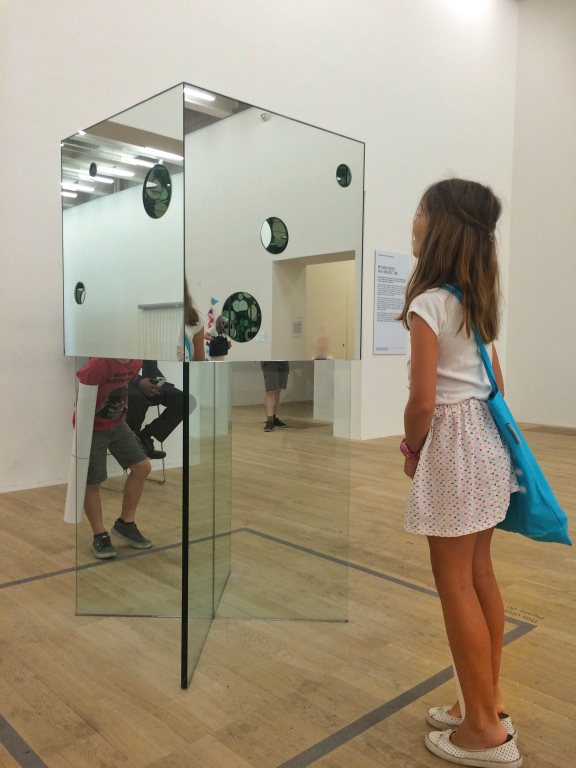 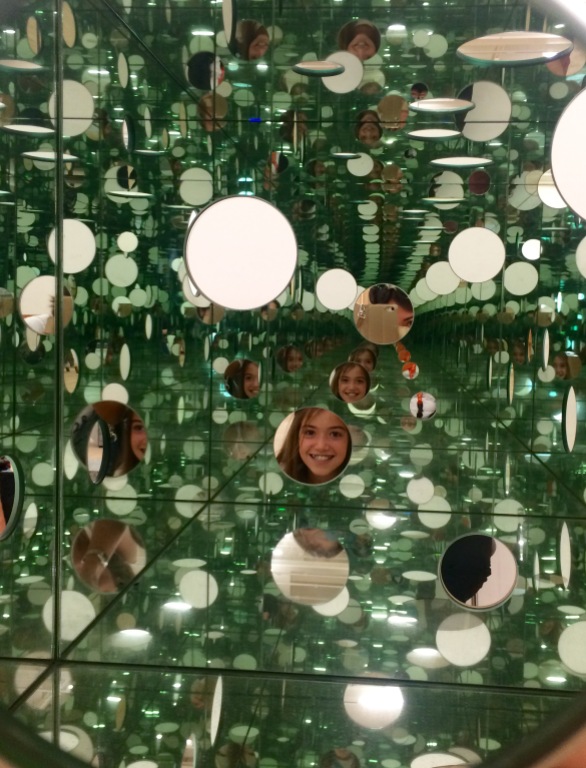 The focus is on the reflected image – the eye goes to the illusion rather than looking / thinking inward about the actual being of flesh and blood. And that’s because the mirror is a symbol of narcissism in the Western world.

In Eastern philosophy, the mirror is emptiness – with no negative connotation. Quite the contrary, a mirror is a metaphor for human nature (“mind-heart”).

Many reflections appear and disappear on a mirrored surface. They keep changing with light quality and surrounding object or weather. People interact with mirrored installations but at the end of the day, the nature of the mirror itself does not change.

When the lights go down, the reflective material is empty. Even during its reflective actions, it is permanent as a mirror and that’s the key take-away of Eastern philosophy.

It’s a point of zen equilibrium that many of us are seeking when we practice yoga and meditation…It’s about reaching a state where we first allow daily images to bombard our mind, then we let them fleetingly reflect off to finally reach the liminal space, in between two thoughts / images. There, we stand feeling “just” ourselves, as a mirror plane would. Empty of stimulation, responsibility and stress. And as a result, complete.

”In Kusama’s Mirrored Rooms, Eastern emptiness and Western proliferation are one²”…That’s what Kusama gifted us with but her huge popularity means museums have no choice but to time each viewer’s experience of it to a few minutes. An Eastern intention in Western reality…but let’s keep trying!

What were your sensations when you experienced an infinity room? Let me know in the Comment box.