Freshly back to my Art History studies, my friend Lorenza was hoping for a few jewel-related stories into the discussions of our course on Impressionism.  Jewelry and gemstones are high on my grid but mixed with Impressionism, isn’t it a stretch? Not in my world: Opal is the Impressionist gemstone par excellence!

Look at the range of pastel colors this opal displays: the soft brownish orange turning to a blushed apricot and a hint of coral, the green alternating between moss and forest until it fluoresces neon-like while bright aqua blue is dispersed widely with rare specks of royal blue emerging from the depth. 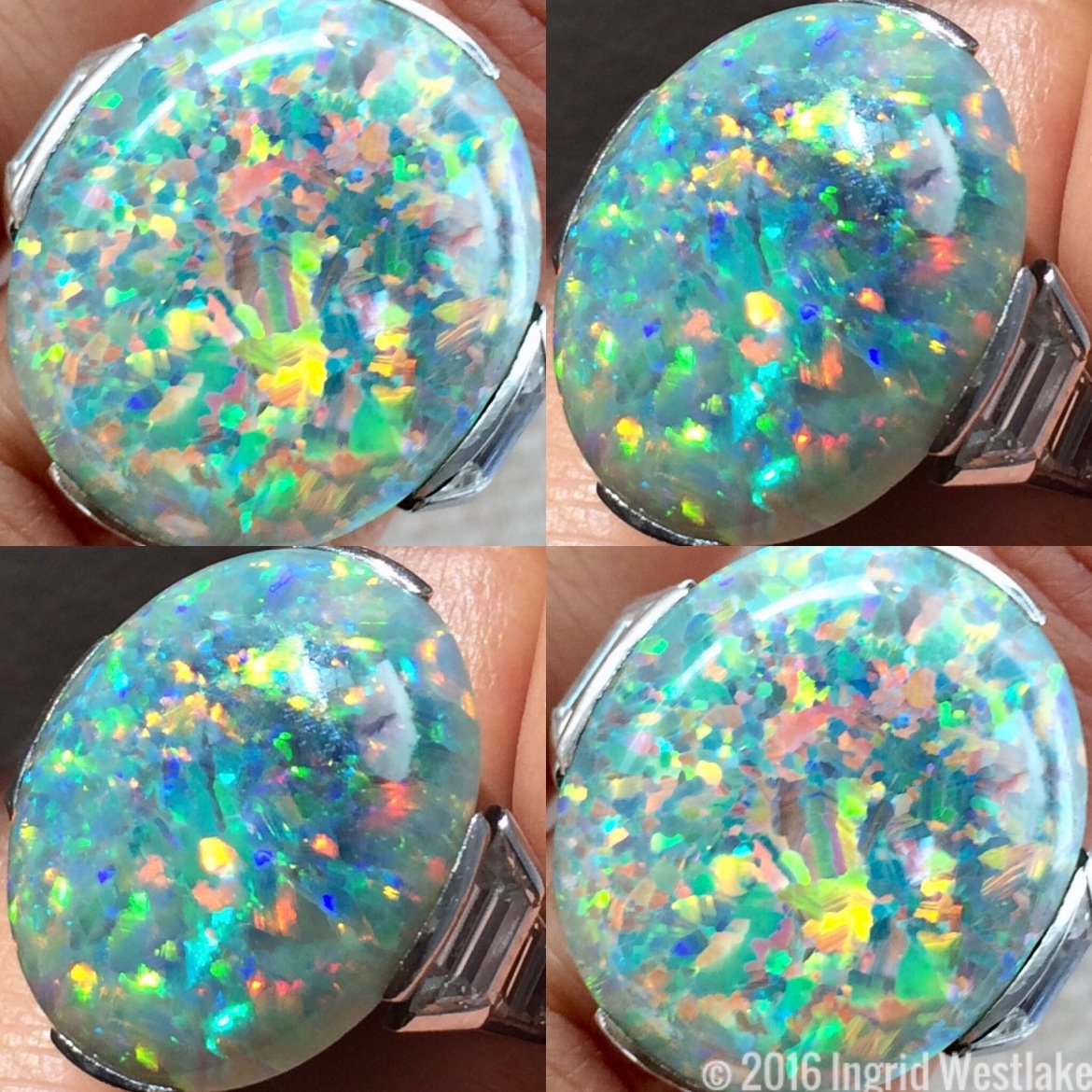 This spectacle is what us gemologists call play-of-color, and it is visually very similar to the open and broken brushstrokes associated with the Impressionists and Monet in particular.

Erosion can have beautiful consequences. Water runs down, picks up mostly silica and other minor elements and becomes a silica-rich solution which permeates cracks. Once there, such solution deposits as small silica spheres which can vary in size depending on temperature and pressure. As the process repeats itself, a whole structure of tiny stacked spheres of varying arrangement and size is created.

If random, you get common opal. If spheres are more uniform and reach a size just under the 400-700nm wavelengths composing white light, opal becomes precious opal as it reacts with light waves via diffraction and interference to deliver a glorious play-of-color.

The very same Nature the Impressionists would take as their studio…

In their quest to capture the special quality of light we all marvel at dusk and dawn, they paid attention to light theory and started painting on light color canvases for added luminosity. As a result, even this dark Impressionist painting by American Impressionist Childe Hassam (chosen for its opal-like quality) seems to come forward to meet us viewers.

In contrast, preceding art from Renaissance to Romantics looks so much somber due the dark canvases used to give the illusion of depth. They relied on the viewers making the effort to step in, if you like, whereas the Impressionists approach you.

Where the Impressionists mimic the phenomena of opals is in their revolutionary way of painting with colors.

They realized the optical effect (equiluminance) produced by the juxtaposition of complementary colors (orange and blue / yellow and purple / red and green). These colors applied side by side mutually reinforce each other to the point that they almost vibrate to our eye and we can’t distinguish contours or outlines.

Manet said “There are no lines in Nature, only areas of color, one against another”. No need to draw with precision then, right?

Yet when Monet presented his evocative Impression, Soleil Levant in 1874, it was judged unfinished, a sketch, “a mere impression” and that’s how the movement got its name.

It certainly differed from the type of art receiving prizes from the Académie des Beaux-Arts: those were precisely drawn, highly finished with no visible traces of individual brushstrokes, revealing theatrically staged figures from a bygone era who had nothing to do with the viewers’ surrounding reality (something like L’Eminence Grise by Louis-Léon Gérome, acclaimed at the Salon while Monet was derided).

Instead the Impressionists aimed to paint a sensation, the very fleeting moment where the light is about to change, when you are desperately trying to imprint its amazing quality onto memory while still savoring all of it before it’s gone. As often said the Impressionists were “painting modern life”.

And life is what seems to animate opals as light diffraction keeps on making its patches of colors dance on the surface.

Remember the stacked spheres of silica? Well, when light gets in the interstices between these tiny spheres, white light gets split (diffracted) into its component spectral (rainbow) colors. Similar to the Impressionists deciding to juxtapose raw colors unmixed on their canvas…

An additional phenomenon happens within opal due to the structure and sizes of its silica spheres. It’s called interference and means that not all colored wavelengths will travel back out in sync with each other – reinforced – as some will get cancelled. The very reason why you get to see just blue or just green depending on angles and resulting interference.

The size of the silica spheres also matters. When mostly tiny, purple and blue are let out (most common) while just small means colors ranging from purple, blue, green and yellow. Only rarer and larger spheres let orange and red be seen.

If you made it this far, you clearly love gemstones for more than their aesthetic sparkle and I would love to read your feedback in the comment box.

Next week’s post will be easier, I promise: it will be about my second resolution of the year. Stay tuned!