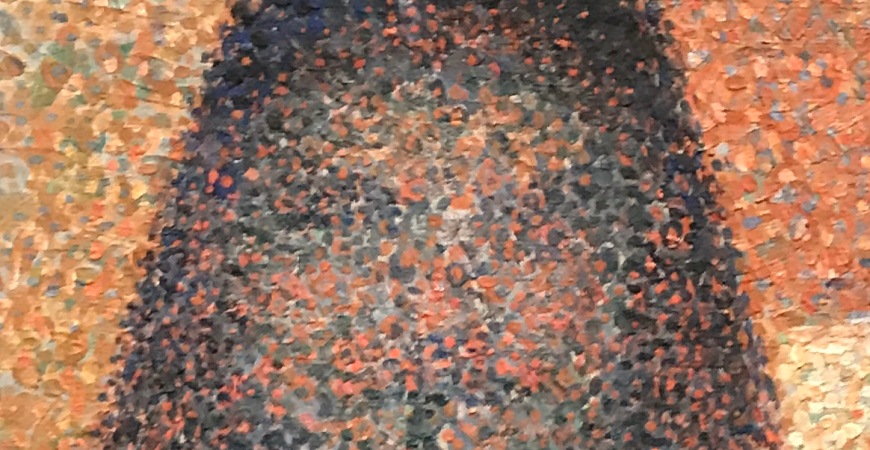 If you think about Seurat, dots should be the next word popping into your mind.

My 5th grade daughter and her class made their own version of Seurat’s The Channel at Gravelines, Evening to be auctioned at the school gala. They used a multitude of dots to recreate local and illuminating colors and paid a brilliant homage to Seurat.

He formalised scientific discoveries on color theory as a systematic approach applied to his painting technique. His breakthrough was termed Pointillism and was achieved with just six major paintings that are so familiar to all.

He did not have time for more: he died aged 31.

If you think about the Impressionists, their time coincided with scientific theories on colors by Charles Blanc[1] and Eugène Chevreul[2].

Saying goodbye to methodical drawing of forms and outlines, instead of mixing pigments directly on their palette, they juxtaposed broken brushstrokes of complementary colors to rely on the optical mixture that our eyes operate when looking at colors side by side. And they were right: Impressionist colors do resolve into shapes and forms producing the “sensation” they were after as well as added luminosity.

So why were they so harshly critiqued for it? Why were their work deemed “mere impressions”? And why were Seurat’s dots more widely accepted?

One reason is that Seurat is a Neo-Impressionist: he came after, after the Salon des Refusés and after seven Impressionist exhibitions. The shock by then was not as strong. Call it “habituation”, if you like…

The formal approach adopted by Seurat was also welcomed by critics because of the deliberate and methodical painterly gesture, the thoughts and application that went into his dotted paintings – those were not “impressions”, there was no sketchiness, it was clearly a lot of work[3] to apply all these individual dots of colors.

With Seurat, black is not black, it’s cobalt blue, red lake and emerald green side by side. His paintings were therefore more acceptable as work of art showing genuine artistry.

But something else is going on in Seurat’s work.

Look at the frozen figures, they look rigid, frozen, like on a pixelated classical frieze.

There is little psychological interaction or relationship between them all, hardly any emotions. That’s a characteristic that the Ecole des Beaux-Arts always preferred in art as opposed to the Impressionist catching of “the moment”! The pendulum is swinging back…

What is striking in Circus Sideshow is the lack of noise you would expect from a representation of la parade, a welcoming popular entertainment set by the ticket office to entice people of all classes to buy tickets for the circus show – top hatted bourgeois towards better seats accessible on the right while lower means bowler hats go left.

If, like me, circus imagery is not generally your cup of tea then please stay with me for a bit of context.

The parade was an early form of marketing for the circus show, where you would see the saltimbanques, the sad clowns always on the road, carrying their ruthlessness and desperation on their long faces. As artists delivering “low art” trying to appeal to the masses, the parade inspired many surprisingly touching circus paintings – including Picasso, Cocteau and Satie with their 1917 Parade. Rouault must have been onto something when he said “we are all of us clowns more or less”.

In that vein, Seurat’s Circus Sideshow differs because of the lack of life and emotion. It’s formalized, mechanical, simplified, on its way towards Synthetism.

X-rays show the grid Seurat used for his composition, emphasizing a strong horizontality as if Seurat was searching for stillness and timelessness. 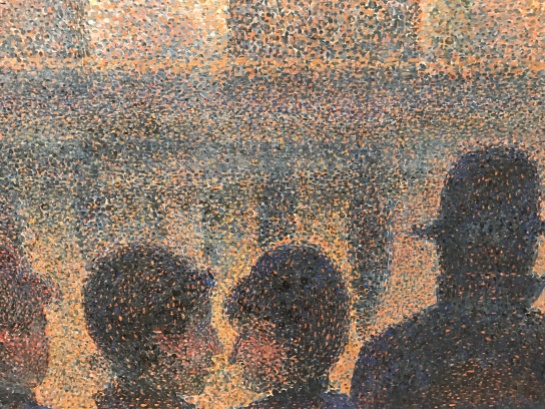 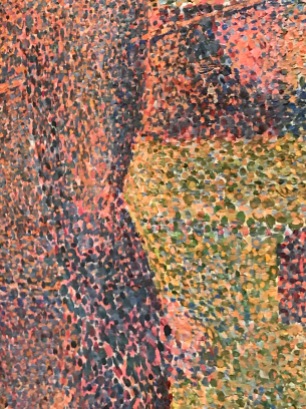 To me, Seurat’s avant-garde pixelisation pave the way towards easier and wide-spread reproductions such as the first Art Nouveau advertising posters by Chéret, Mucha and Toulouse-Lautrec which will follow just a few years later. These will come to replace the humane marketing form that the parade clowns delivered.

When Richard Thomson evokes “the industrialization of contemplation”, I can’t help but think about Cirque du Soleil in our time…

The importance of the parade does not stop there. It inspired caricatures from the like of moralist Honoré Daumier who was quick to make the parallel with another parade imagery: la parade politique.

Honoré Daumier, The Side Show, (1865-66), © Private collection, courtesy The Metropolitan Museum of Art.

Now, you may wish things had changed in more than 100 years but current events in too many countries (where I am from, I have lived and now currently living) prove otherwise. So, imagine my reaction on finding this pearl from the Beaujean et Littré dictionary of the time:

“parade politique: political behavior that is no more than a joke”.

Honoré Daumier, Baissez le Rideau, La Farce est Jouée (Bring Down the Curtain; the Comedy is Over), 1834, The Metropolitan Museum of Art

No wonder Honoré Daumier and his finely observed caricatures basically planted the roots of a French caricature tradition that Charlie Hebdo and al proudly perpetuated.

Circus Sideshow is a mysterious painting for another reason. It is a nocturnal scene using a technique supposed to add luminosity. Clearly Seurat was challenging himself to reproduce with paint the novel effect of artificial illumination.

As “the last colors the human eye distinguishes at twilight (are) dark violets and greens[4]”, Seurat seems to have overwhelmingly use those in his composition.

Yet, look closer. Mauve and violet are actually made of ultramarine, vermilion, red lake and lead white dots. Nothing is simple but everything is luminous.

Seurat illuminates the local color of his forms (made of broader dashes of colors) with diminishing dots of zinc yellow and vermilion turning orange to our eyes.

He practiced such atmospheric technique with his Conté crayon drawings where you can see his masterful use of values and textures achieving full modelling of forms.

You can clearly see his preoccupation is not psychological interaction. His figures are faceless and frieze-like yet there is a harmony in black and white that Seurat beautifully translated in secondary colors of green, violet and orange in Circus Sideshow.

The Met Museum has put together an amazing video to recreate the nocturnal effect Seurat intended. It speaks louder than words so click on the link.

In the end, Seurat differ a great deal from Impressionism (no sensation, almost no life) but owes a lot to the original movement in terms of experimentation with color contrasts and light effects. Pointillism, in its attempt to deliver timelessness on canvas, almost seems like the perfect farewell speech for true Impressionism.

The Met Museum in New York currently dedicates an entire exhibition to Circus Sideshow until May 29, 2017. I went because I am obsessed with colors and light due to my gemologist background. I came out enriched beyond belief as the many socio-economical layers of Circus Sideshow unravelled before my eyes. And Richard Thomson’s exhibition catalogue is a must if you love Seurat.

[2] The Principles of Harmony and Contrast of Colours, 1855