No two ways about Paul McCarthy’s exhibition at Hauser & Wirth Los Angeles: it is heavy! Up to 18 tons heavy! 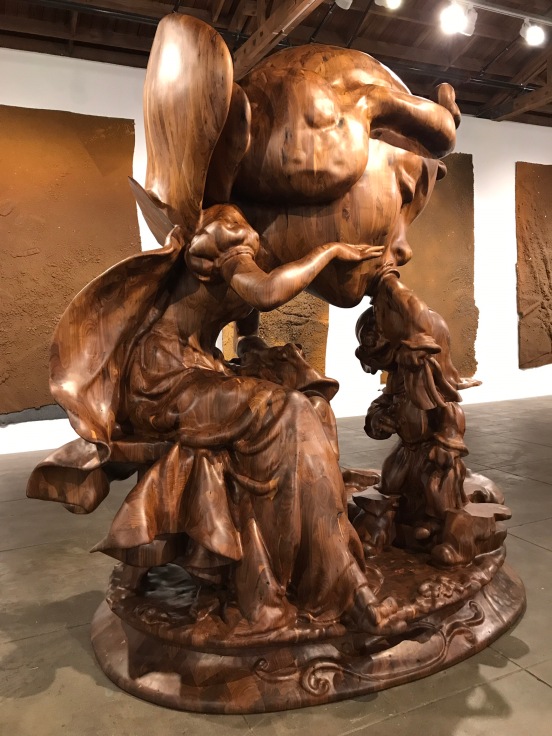 In Paul McCarthy’s monumental black walnut sculptures, it’s impossible not to recognize Snow White as we know it from the 1937 Disney adaptation of a German folk story called Schneewittchen by the Grimm Brothers. Yet even back then, there were an animated cartoon and a fairy tale, two versions of the same character. And here, Paul McCarthy is definitely taking Snow White in the dark dark woods of his mind and our society to unravel many of her personalities. So is the simple question “Mirror, mirror, who is the fairest?”.

Since 2009 when he had his first show on the subject at Hauser & Wirth NY, Paul McCarthy’s art has shown Snow White reborn as White Snow (aka WS). It was mostly drawings back then but as McCarthy keeps on revisiting his obsession, he is definitely adding size and weight. And he keeps flipping back the mirror on us all.

From White Snow (Bambi), 2013 looking almost traditional in both size and medium (white marble), White Snow Head, 2012-13 in silicone, glass and steel as seen at Marciano Art Foundation is resolutely more punchy. In both color and imagery.

Multiple perforations and a broken arrow in her neck, is White Snow a victim or a bad girl?

One thing for sure, Paul McCarthy’s art is depicting no fairy tale. It’s a “direct assault on American normality¹”, a normality where everything is supersized and absorbs too much Disney for way too long.

For me, two themes keep recurring in McCarthy’s work – although I am sure it’s even more complex than that.

First there is the reference to the Evil Queen’s mirror. Snow White becomes White Snow, an inverted name for two distinct images of the same character. Yet the sculptures are not quite mimicking the typical reflection you get from a mirror because there is no physical split of personalities.

Instead, McCarthy’s White Snow mirror images are joined up at the hip. Good girl and hottie made of the same wood and with no way to tell the difference. A bit like teenage girls joined to their selfie image at their phone: who is the true “you”, Princess?

Other sculptures have multiple members and heads growing on each other, witness the Prince in WS, Erection standing at 12-feet high.

Charming and very tall but why is his face a big blank? Does teenage love make you blind or do we read too many fairy tales?

Again with WS, White Snow and Prince on Horseback. Merger, Transformation, Mutation, the horse has countless legs and both characters are depicted with various heads merging and fusing into each other’s necks.

A multiplication of bodies, trying to become one but White Snow is always much smaller as if her mind was taken over as it fuses³ into the Prince’s neck. Is that surrendering your mind part of the aspiration to true love??

We all know a coming of age story is never as simple as a Disney magic kiss. There is always a (wooden) mass of sexual undertone fuelled by hormones. And what the book does not tell you, McCarthy makes it impossible to ignore.

I think using wood as his material is so clever here…and so very different from what you typically see in the sculpture world. It’s arching back to wooden toys instead of plastic Disney characters. Creating a solid and long-lasting incarnation for characters associated with a more disposable “Made in China” toy industry.

And I don’t think it ends there. Remember the dwarfs go out to work in the forest, heigh ho! They are miners digging up for diamonds, symbol of true love, right?

As some of McCarthy’s sculptural finish takes on the effect of bevelled rays, they reintroduce the shiny blinding effect of the mirror and its many possible reflections.

Other patterns include those seen on butcher blocks. Is McCarthy saying that where Snow White was pure love, White Snow is just meat? It would not be the first time since McCarthy did “perform” with a lump of ground beef in early works².

Yet, overall his monumental sculptures are also incredibly tactile due the smooth polish of the wood. Don’t you feel an urge to touch and caress that beautiful walnut wood?

Hard to resist such a seductive texture and warmth. Hard for Snow White to resist biting the apple – the one offered by the witch as well as the original one that made Eve a woman.

And that’s the point McCarthy’s Bookends makes so forcefully when it comes to these fairy tales and children books that are read and watched countless times.

They bear weight. The books and the sculptures.

So much weight those Bookends do well to physically dwarf you as a perfect metaphor for what too much of these Disney tales do to our children’s brains.

Look closely at each of the sculpture composing Bookends. It’s the Prince and White Snow on horseback but one bookend is standing vertically while the other has the same sculpture tipped horizontally. Yet when you’re in between, it’s hard to see those twists clearly, let alone the subject and to know where you stand. That’s real life!

As viewers in the Hauser & Wirth, we are free to evolve and walk around these characters from the books, themselves made of the same wood. Paul McCarthy makes us literally stand in the space where the books should be, between the Bookends.

By making his wood sculptures so gigantic, McCarthy shocks you to vigilance. Watch what you read, especially to children and be prepared that life is no fairy tale unless you write it.

That’s my take on it but I’d love to hear what you thought if you had a chance to see this exhibition. The Comment Box is all yours…