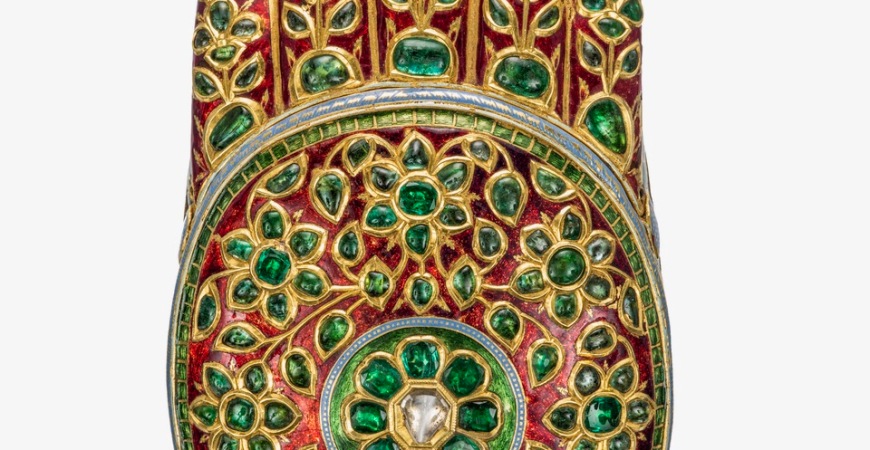 Spotting Raja de Kishangarh’s bowtie, being carved out of emeralds of a size usually associated with pebbles rather than gemstones, or a Mughal necklace rich of 150 carats of the finest Golconda diamonds and 47 Colombian emeralds beads, it could be tempting to reduce Mughal ruling of India (1526-1857) to Centuries of Opulence.

Albeit the title of a new exhibition of Jewels from India at the Gemmological Institute of America (GIA) in Carlsbad, CA, I would argue instead that the aesthetic eye of the Mughals was rooted in a true understanding of luxury and honed by learned interests in art, architecture, science, culture and religion extending well beyond their Muslim faith, a tolerance which left an indelible mark on the arts of India.

According to GIA, it was the famous mines of Golconda diamonds and the availability of Mogok rubies from nearby trade with Burma (now Myanmar) which attracted Babur as first Mughal conqueror of India in 1526. Travelling from Central Asia, Babur’s nomadic lifestyle “cramped” his penchant for luxury goods but this changed radically once he settled his court in Northern India.

With mines yielding “high-born and flawless” gemstones believed to carry mystic powers (long life for diamond, power and energy for ruby, life force for emerald), Babur and subsequent Mughal emperors harnessed the symbolism of such riches. Not only did they adorn themselves with jewels, they engraved their names dynastically on the largest spinels and emeralds.

Believing mystic power flowed from gem into wearer, Mughal emperors made their jewelry an aesthetic projection of status, worn casually everyday but also taking centre stage during Mughal festivals where rulers would eat out of bejewelled spoons or be publicly weighed for their equivalent in gold to be distributed to the poor.

Such display of metalwork imbued with power was the secular equivalent to Hindus believing that only portable bronze deities of optimum beauty could attract their gods to inhabit such statues during pujas, religious festivals spreading from temple into streets. Covering these statues with flowers and jewels, Hindu worshippers hoped for darshan, the spiritual dynamic connection of seeing and being seen by their deities.

Of monotheist faith, the Mughals knew they were no Gods but borrowing the dual concept of darshan perhaps came naturally due their elevated concept of what luxury could be. Not only was jewellery worn as a public expression of power, it was also a very private sensorial experience.

Much can be learnt from a simple observation of Mughal jewelry. At face value, designs are usually covered with large emeralds, ruby cabochons shining like pomegranate seeds and accented with countless diamonds set in bright yellow 22k gold. Yet, turn around any piece, you will see that obverse and reverse are of equal beauty, the inside of bangles exquisitely enamelled and polished with the utmost care.

What would awe congregations seeing these jewels being worn by their accepted rulers matched the private pleasure of said wearers who revelled in the hidden jewels touching their skin or the impeccable facture of necklaces sinuously espousing the curves of their neckline.

To this extent, let us entertain for one moment that the often ignored striking reverse of Mughal specimen is their unwavering Muslim faith (held closed to their chest) while what the plural Non-Muslim society of India saw glittering on their rulers echoed their very own congregational ways of celebrating the deities they were never forced to abandon.

It could be argued like in (Hattstein & Delius, 2015) that Mughals found in jewelry an artistic expression which soldered their own religion to diverse cultural influences and religions they chose not to quash. Using Mughal festivals which Hindu could relate to their own pujas, these occasions became an “instrument of policy” to make a “cohesive whole” out of the diversity of their court.

Whether such tolerance was strategic since Muslims were a ruling minority, ample signs show Akbar and his heirs not only respecting religious differences but also learning avidly from other cultures.

With a highly structured court rich of astrologers, gemologists, jewelers, poets, scientists, botanists and monks of all faiths, Mughals valued education as much as aesthetics, arching back to their luxurious approach that what was beautiful on the surface (obverse) needed to be rooted in knowledge and understanding (reverse).

This comes through beautifully in the GIA exhibition. Some of the bejeweled pieces visually show the dialogue and mutual exchange which was allowed to happen with tolerance between Muslim and non-Muslim artisans.

Two white jade (“mutton fat”) pieces show similar lines and settings. One a Mughal turban ornament, the other a Hindu Navaratna talisman, they both display eight stones centred on a ninth and are rooted in the belief that white jade will protect from heart disease. Yet the Navaratna adds elements of Indian astrology which Mughals were keen to learn.

In a pendant used to dress Hindu statues paraded during pujas, Krishna and his consorts look alive for their eyes are symbolically carved open in precious stones – an act Hindu artists performed last, with darshan on their mind. While the Hindu deities’ ruby limbs sparkle a dance, one can almost hear the chimes of small dangling pearls and emeralds.

Of great importance for Hindus, these multi-sensorial motifs were already part of an 18th century Mughal Horn pendant in which a 125ct Colombian emerald surrounded by pearl drops gives life to poetic salutations of peace engraved in Arabic. As such, similar style and material use were shared to serve both figurative Hindu and non-figurative Muslim jewels, respecting religious preferences.

As Mughal emperor Akbar was keen to commission illuminated manuscripts retracing Non-Muslim tales, so were highly symbolic Hindu motifs like Shiva Nataraja (Lord of the Dance) translated into jewels.

Here, a face carved out of blue sapphire imbues Shiva Nataraja with all the strength associated with planet Saturn as he steps on the dwarf of ignorance while balancing a dance. Beating a diamond drum of creation and time at left while balancing the ruby flame of destruction at right, Shiva shows fearlessness when facing a cat’s eye chrysoberyl snake with his bejewelled trident. With his raised dancing foot dynamically set in emeralds, Shiva assures salvation. As Nataraja, he is embodiment of the Work of God itself.

Equally, Buddhist symbols can also be observed in sumptuous royal manga mala necklaces, their mango-shaped elements reminiscent of the leaves associated with the bodhi tree under which Buddha reached Enlightenment.

As wearable art , jewelry came to embody mutually reinforced artistic inspirations, fuelled by a conciliatory attitude towards all religions practiced at court. This gave birth to a hybrid style, now called Mughal style. Mirroring the underlying quest for knowledge and cultural exchange which underpinned Mughal rule, such style was expanded well beyond jewelry, into miniature paintings, applied arts and Indo-Islamic architecture such as the Taj Mahal, often termed a jewel in itself.

Centuries of Opulence, Jewels of India at the GIA is a beautiful opportunity to visit the wonders of the Mughal world. The exhibition consists of 50 jewelry pieces on loan from a private collection which wants to remain anonymous.

Photography is prohibited at the exhibition. I am therefore thankful to GIA for their kind permission to use their own photographs taken by Robert Weldon.

You will need to make an appointment to visit, weekdays only.

Heilbrunn Timeline of Art History, The Art of the Mughals, MET Museum